You are using an out of date browser. It may not display this or other websites correctly.
You should upgrade or use an alternative browser.

Breaking News: Shortage of computer parts due to coin miners.

Due to a rise in people investing in equipment for mining crypto currencies, there is almost no availble computer parts. Almost every vendor we have talked to has expressed that they do not have any computer parts left.

SAN News has talked to Auta Stoke who has set up a stall in the middle of Verona Mall. Mr. Stoke expressed that he gets in limited supplies of parts per day, but they all get sold out before he even has a lunch break. When asked for a comment on the situation, he told us: "These darn doodly things are selling out as my supplier unloads them. There is an insane demand for these weird cards. I don't know much about them, but they sure are making me money!"

Suppliers have commented that they might be enforcing vendors to limit the amount each vendor can buy, but as of now there is no official regulations.

There has also been a rise in so called "scalpers". SAN News got this comment from one of them, who preferred to remain anonymous: "I get some parts every day. I got my own sources. What's funny is that I charge double price, but people still buy from me. They got no other chance."

It seems to be unclear what happens to the market as the demand does not seem to stop rising.
One thing is for sure, cryptomining is the new big thing in Los Santos.


How it works:
Step 1. Buy the parts you need at either the retailer in Verona Mall, or from the shady scalper at docks. Stocks are limited, so be fast. New stocks comes every day, but is always limited. 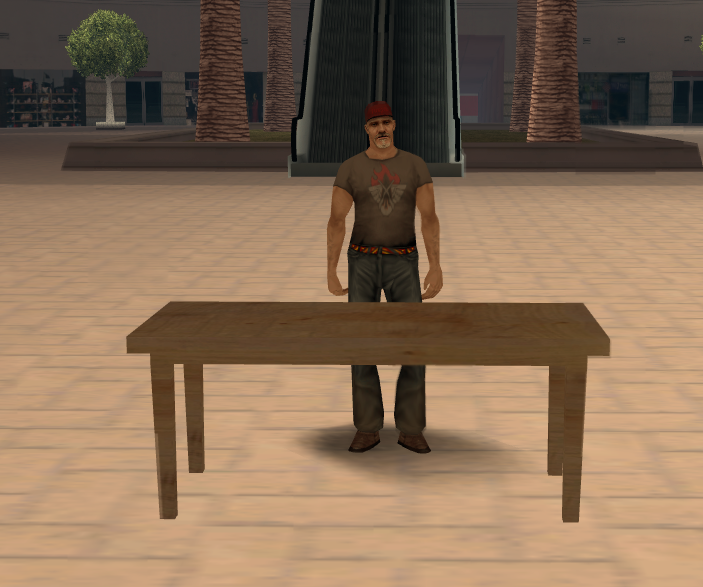 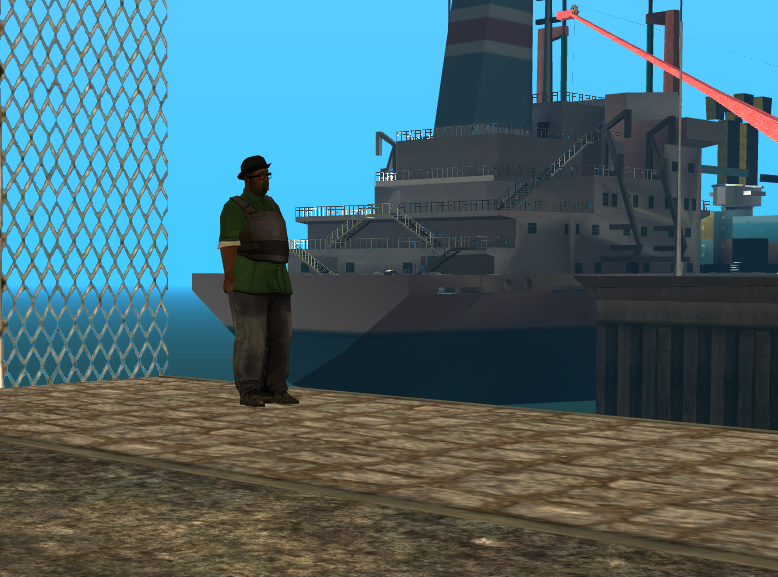 Step 2. Buy the mining rack. This item does never go out of stock. You can buy it in the electronic stores. 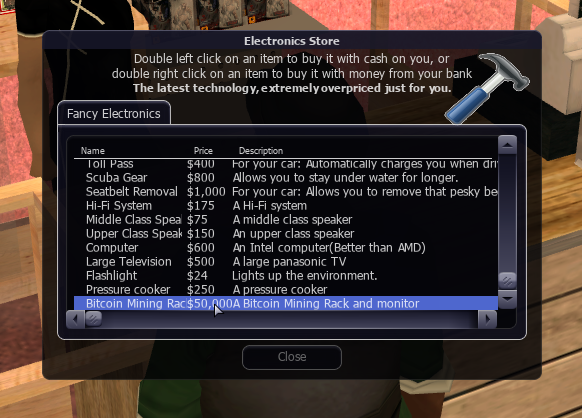 Step 3. Go to your interior and click on the mining rack in your inventory to place it. You should have a quite high ceiling as it is a bit tall. 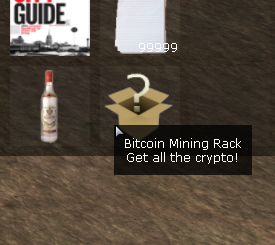 Step 4. Place the computer parts into the rack by dragging the item to it.. You can have 1 motherboard, 1 CPU and the amount of GPU depends on your motherboard specification. 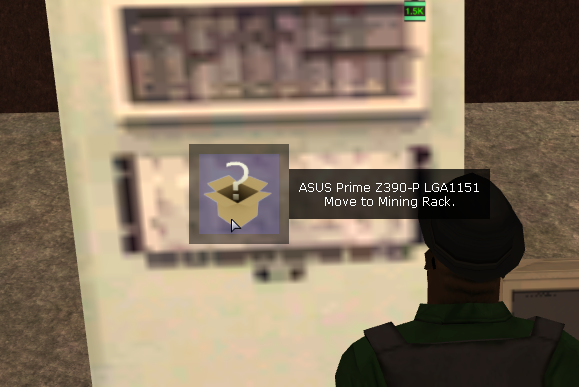 
Bitcoin Wallet:
To set up a Bitcoin wallet is simple. You can only have one per character.
Step 1. Open your PDA and click on the bitcoin logo. 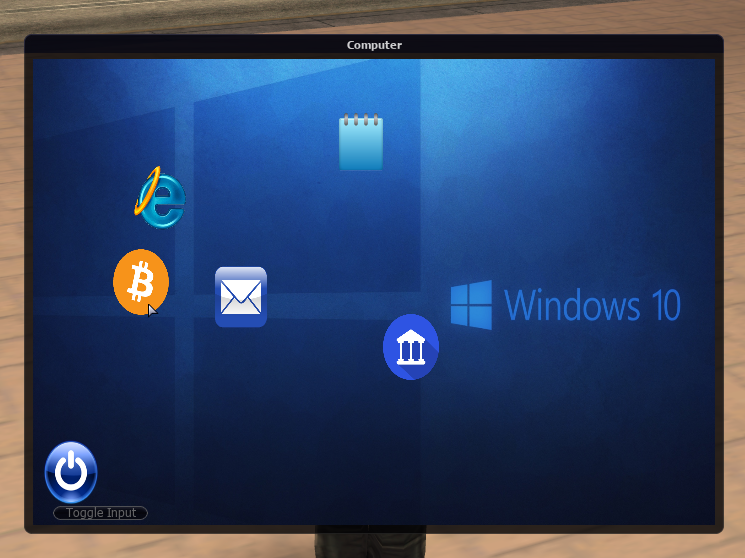 Step 2. Click to generate an address if you do not already have one. 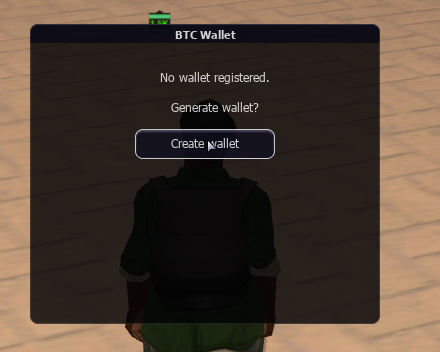 Step 3. Now you can always access your wallet and the controls straight from your PDA. 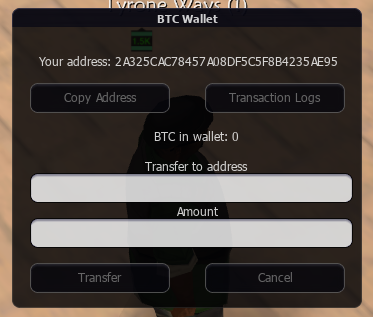 About the new crypto mining system:

The new crypto mining system brings in a new system for bitcoin that will replace the old system. This means all the old bitcoin has been wiped, and the gun NPC and smuggling routes has been removed.

This new system is as of today only for mining and sending currency. It has no direct purpose as of today other than being an alternative currency between players.

New systems will come that will take advantage of the new bitcoin currency, such as for ordering gun supplies. As of now, until this system is in place, illegal factions may get approved gun supplies by contacting me on Discord.

Also to come soon is a marketplace for trading bitcoin, which will regulate price by supply and demand.

How can I get started?
You need to buy a mining rack and place it. Then you can drag the computer parts into the rack and start mining.
To buy the parts you need, you can buy it from the vendor at Verona Mall, for a higher price from the shady scalper at docks, or from other players.

The parts are sold out!
Every day the vendors will get a limited supply of parts. What time they get supplied differs each day, and NO announcement will be made. First come, first serve.

How much are bitcoins worth?
There is no set value. It depends all on supply and demand. And as of now the marketplace is not released, so the price is really up to what the players demand from it. I suppose once people figure out how many coins they get based on the electricity cost they pay, a price for btc will be known between players. But there is really no set price.

Why does my miner keep shutting off?
If the power bill reaches a too high amount, the electricity company shuts you off. Pay your bill to let it stay on. This is so you cannot leave it on and be inactive and come back to high amounts.

What password should I set on my miner?
The password should be secure as anyone who has the password can get access to your miner. They are not set to a specific player. However, while the passwords are encrypted for security, I recommend to NOT use a password that you use elsewhere, outside MTARP or within MTARP.

Can I have more bitcoin wallets?
As of now each character can only have one wallet. I was thinking about making them more realistic with private and public keys, but due to possible alt-to-alt, it is for now one wallet, locked to your character. This might change in the future if it can be safe from alt-to-alt.

Can I access my miner from my other character?
No. That's alt-to-alt. So while anyone really can access any miner as long as they have passwords, it could be able to use them as a mode of alt-to-alt. Therefore, for each machine you log in to, it will lock to that character, and any other character you have will not be able to log into that specific miner.

How many miners can I have?
As many as you want. But parts will be limited.

How can I take out a part from my miner?
As of now that is not possible. As supplies will be limited, people has to think twice before they buy mining equipment.
If however, you wanted to remove a part to put in a better part, you can contact me to have it removed, but you will NOT receive the item back nor a refund.

How can I move my miner?
For now, contact a lead+ to move your miner.

When will the new systems for spending bitcoin come?
They are already in development and will be out soon. However no specific date can be set.
Development is going smoothly and it's my goal to push out new features as often as possible.
I believe there will be ways to spend bitcoin before everyone will be able to pick up enough parts.
As of now, if you mined some coins, maybe your local gun dealer would take it as payment?​

Hopefully it will find use. Bitcoin is the new future.

is there a cmd to display my wallet address?

Keeper of the Keys

BrunoJackson said:
is there a cmd to display my wallet address?

**Nevermind lol i opened the PDA and found it there
Click to expand...

Good idea. Ill add this to /btcbalance as well